Detectives are releasing two photographs of the suspects – Do you recognize them?

Detectives located video surveillance footage capturing the incident in its entirety. Detectives are release two still images depicting the suspects in the hopes someone from the public can help identify them. Do you recognize the subjects in the photographs? If you do, please contact Detective Zebb at (415) 473-7265 or j_zebb@marinsheriff.org.

Additionally, Detectives are asking that anyone who may have video surveillance or still photos capturing the suspects or a vehicle prior to or after the robbery, to utilize the provided link to upload their video/photographs: 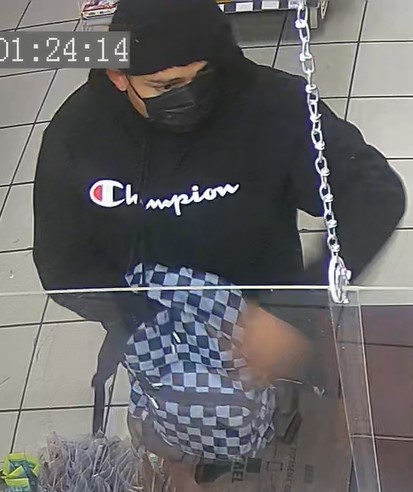 Deputies arrived on scene and determined two suspects entered the store and demanded cash from the store clerk. While the clerk was gathering the cash from the drawer, the suspect demanded the car keys from a customer within the store. The customer saw both suspects appeared to be armed with unknown type handguns.

Once outside, the suspects confronted an additional customer who had just arrived in their vehicle. The suspects demanded the keys to her vehicle and then forcefully took the keys from the second customer. The suspects also forced a passenger in the vehicle from the car. The suspects left the area in the victim’s vehicle and were last reported to be seen driving toward China Camp State Park.

The investigation into this incident is ongoing and no suspects have been arrested. We are asking that anyone who lives in the area of 7-11 or the 800 block of Vendola Drive to check their video surveillance systems prior to and after the Robbery and Carjacking.

Anyone with any information is encouraged to contact the Marin County Sheriff’s Office Investigations Division at (415) 473-7265 or Detective Zebb at j_zebb@marinsheriff.org.